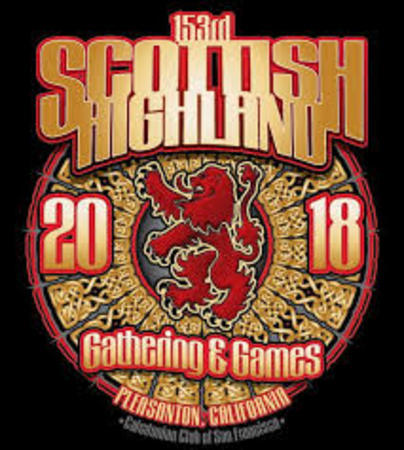 Join VIP Guests Gary Lewis, Chief of Clan MacKenzie in TV's Outlander, and Hafthor "The Mountain" Bjornsson from TV's Game of Thrones, as we celebrate Scottish culture, cuisine, competition and entertainment at its very best, right here in California. The 153rd consecutive Scottish Highland Gathering and Games takes place at the Alameda County Fairgrounds in Pleasanton on Labor Day Weekends (September 1 - 2) 2018. Labor Day Weekend, September 1 and 2, 2018Alameda County FairgroundsPleasanton, California Living History at the Games features numerous guilds and societies who provide wonderful interactive theatre and an exhibition for all the family to enjoy. Please consult the Fairgrounds Map for location of Living History, and 2017 schedule to watch battle reenactments, knighting ceremonies, Mary Queen of Scots, kilting demonstrations and more. The Scottish People, as we are known modernly, have been ten thousand years in our evolution as a distinct, ethnic group. Hollywood and Television's representations have projected an image of us that corresponded to all the "strange" hype of former historians, literary critics, and politicians. From the time of the Roman historian, Livy, to critics as Gordon, Lord Byron, of Robert Burns' poetry, as well as English Monarchies, such as the Plantagenent Edwards to the current House of Windsor, and their Prime Ministers, the English have made an effort to purge Scots' culture and language from what is commonly, and modernly, known as The British Isles. As a consequence, few non-Scottish-Americans have any accurate information of who we are, where we are from, and what we do. For these and other reasons, this site attempts to bring the more colourful and heroic characters and information of Scottish Living History to our growing audience of Scottish-American kinsmen of these traditional Scottish Games. URL:Inquiries: https://go.evvnt.com/264447-2?pid=5569 Time: 9:00 am - 4:30 pm Prices:General admission - Adult 2 Day: USD 40.0,General admission - Adult 1 Day: USD 25.0,General admission - Senior 2 Day: USD 25.0,General admission - Senior 1 Day: USD 13.0,General admission - Youth 2 Day: USD 25.0,General admission - Youth 1 Day: USD 13.0,Active Military, Children: USD 0.0,Grandstand - Reserved: USD 10.0,Grandstand - Bench: USD 8.0,Trackside: USD 50.0 Venue Details: Alameda County Fairgrounds, 4501 Pleasanton Avenue, Pleasanton, 94566, United States