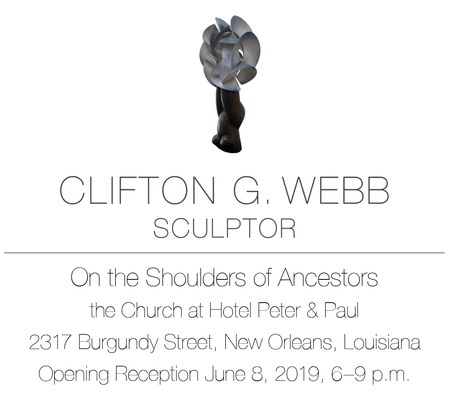 Using his own visual alphabet developed over creative decades, New Orleans-based artist Clifton Webb’s work is imbued with reverence and dignity. Though his visual framework may not be immediately familiar, they are unmistakably noble. Webb’s work proclaims: “This is me and all the people around me who don’t get to see themselves; who don’t get to see the royalty and sacredness of who the African American is.” A co-founder of the New Orleans Contemporary Arts Center, Webb’s work is included in the permanent collections of the Ogden and the New Orleans Museum of Art. and Dooky Chase Resturant. Other exhibitions include Stella Jones Gallery, Ohr-O’Keefe Museum, Dallas African American Museum, New Orleans Jazz and Heritage Fest, Chattanooga Museum of Afro-American Culture and History, Arthur Roger Gallery, Alternatives Museum, Max Hutchinson Gallery and Atlanta Arts Festival. Webb is also an arts educator with a BFA and an MFA in sculpture from Louisiana State University.